Home » News » Community » No Blues for These Blue Band Members, Despite COVID-Caused Limitations 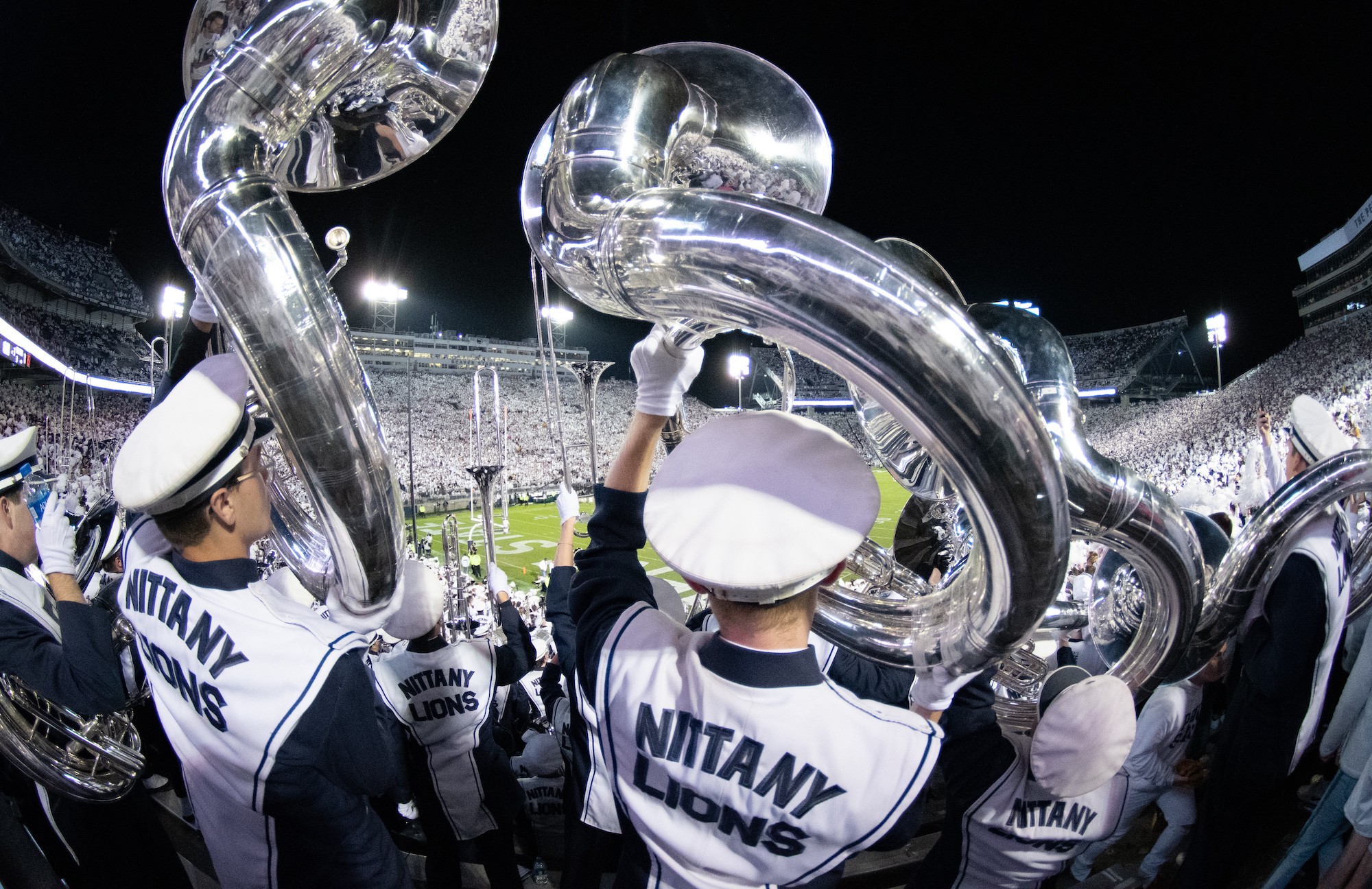 What if an entire year went by with absolutely no excitement emanating from the Penn State Blue Band?  What if we never saw band members in their simple, bold uniforms? If we never had the chance to roar as they high-stepped their way from the Beaver Stadium tunnel? If there were no dramatic flips from the drum major? And no stirring sounds of “Fight On, State” or the “Penn State Alma Mater?”

Of course, that’s exactly what we experienced in 2020-21, an unfortunate by-product of COVID-19.  But as disappointing as things were for Nittany Lion fans, the situation was much tougher for the musicians.

Despite practicing faithfully throughout the fall, the band members never once put on those beloved uniforms. They never once played for a football game. And they never marched a single step, not even in practice, lest they walk through another musician’s breath and get exposed to the stealthy coronavirus.

Many of us worried about the morale of Penn State’s football players as they struggled through a miserable 4-5 season. But, in retrospect, I think we should have paid a bit more attention to the members of the Blue Band. At least the football team got to play.  The Blue Band kept practicing week after week as a “standing band” with no performances.

BLUES FOR THE BLUE BAND?

That’s why I felt privileged to talk recently with two senior members of the sousaphone section, Caleb Szabo and Jonathan Detwiler, in an attempt to understand their loyalty. My introduction to these musicians came from Joe Violi, a friend from State College Evangelical Free Church who works as a staff member with the Navigators ministry and who served as a spiritual mentor to Szabo in 2019-20.

“They love to perform, and they’re good at it,” Violi says. “And there’s only a handful of opportunities during a normal season. So when you take that piece away, it’s a bitter pill to swallow.

“They could have tossed their hands in the air and done a lot of complaining and whining. Maybe some of that happened, but I didn’t see any of it. It was impressive to see their stick-to-itiveness.”

Stick to it they did, but both Szabo and Detwiler battled feelings of futility that began with the arrival of COVID last spring.

“I remember back in March when we heard the NBA was shutting down,” Detwiler says. “That’s when it got real for me. But I still felt that we’d be able to march for football games in the fall.”

Concerns grew as the pandemic worsened, and hopes plummeted during a virtual meeting last summer.

“We got on this big Zoom call for the whole Blue Band once Dr. Drane (Gregory, the band’s director) figured out the plans for fall,” Szabo recalls. “And I remember being super disappointed because we really had nothing.

“That was really all I needed to hear to get me to push through the negatives. I know a few people — fewer than 10 — who didn’t come back to the band because they decided it wasn’t going to be as much fun. I would have hated this year without Blue Band.”

Szabo had passed his inner test, but Detwiler faced his greatest challenge when time came for the annual mid-August Band Camp.  “I remember feeling frustrated that we were having Band Camp,” the aerospace engineering major from Souderton says. “To me, at that point, there were no football games and really nothing to be practicing for. What’s the point of this?

“But as soon as I got back to campus for the camp, I was so happy to be here because I missed the people so much. And I realized we need to keep the band at a certain level. We wouldn’t want to have two classes (freshmen and sophomores) who had never learned to march when they start up next fall. By the end of Band Camp, I was thinking, ‘Wow, I’m so glad the directors went forward with this because I missed the atmosphere of the Blue Band and I’m glad we could keep the legacy going forward.”

Hope still lingered into the fall for the possibility of football game performances. But then there was the day that Drane spoke from the band tower and had to put the final nail in the coffin.

“That day was tough,” Caleb says, “because several schools — maybe Nebraska and Iowa — had said they were going to get their bands included in football games.”

Both sousaphone stalwarts say that their band friendships, together with their Christian faith, enabled them to endure the disappointments.

“It ended up being a weird year,” Detwiler says, “but the moments with the band were less about what we were doing and more about who we were doing it with. When I came into the Blue Band I had a huge group of friends that has lasted all four years.

“Blue Band made my college experience what it was,” adds the man who will soon be working for Northrup Grumman in southern California. “I’ll probably look back on these as the good old days. The game day experience, the trips…”

“This was a disappointment, says Szabo, a music education major from Quakertown, “but my faith helps me keep things like this in perspective and not just look at things selfishly. There’s such bigger things out there to care about.

“And I’m hoping we never forget our friends from here. I’m hoping I’m still in touch with these people when I’m 70 or 80. I knew even if I didn’t play a single note or take a single marching step, all of my friends were here. I have hundreds and hundreds of fun memories from things in the stadium or during parades or on bowl trips or just hanging out with friends.”

Suddenly, a storehouse of memories had been opened, and both band members begin pulling out their favorite stories.

Adds Detwiler, “The bowl trips are basically three- or four-day vacations, expenses paid, with all of our best friends. They put us in a four- or five-star hotel and give us a lot of down time to hang with our friends. We invented a game in Dallas—“Volley Sack.” It’s played on a tennis court with a Hacky Sack, like volleyball with no hands.”

I’m not a musical guy, and I’ve certainly never played in a marching band. So I thought I should get some added perspective on this year’s Blue Band drama. It just took a quick phone call to Katy, Texas for me to capture the thoughts and feelings of an old Acacia fraternity brother, Zeke Zeiler. He was a member of the Blue Band in 1970-71 and 1971-72 before the rigors of pre-med studies ended his band career.

I asked how he would have felt about being in a band that could practice but not perform.

“Well,” the former clarinet player said, “that’s really sad because it is a musical performance. The practices are for the purpose of the performance. If all you did was practice on a sports team but never played any games, that would be very frustrating.”

So then I told my buddy about what Joe Violi had said—that he heard no complaining or whining from the members of this year’s band.

“That shows a lot of maturity on their part,” Zeiler said.  “I’d be very proud of young men and women like that.”

Perhaps some members of the Blue Band will get to play for the informal spring game to be held by the football team on April 17. But even if that happens, they won’t be wearing their uniforms since those uniforms were never issued. And they won’t be marching. And they’ll have to observe social distancing while wearing masks with slits to accommodate their mouthpieces. Furthermore, Caleb Szabo won’t be participating since he’s doing his student teaching this semester and is thus ineligible for band activities.

I’m wondering if there might be some future opportunity for the athletic department or Blue Band leadership to recognize this year’s band. Not so much because of their musicianship, although I’m sure they were as accomplished as bands of previous years. No, I think they need to be honored for their loyalty to the cause.

After all, if you look at the “ring of honor” in Beaver Stadium, each year on the ring is there to honor a football team with a fabulous record. Except for one. The 2012 team finished 8-4 but hung together in loyalty to Penn State despite the sanctions that followed the Sandusky scandal.  Other universities sought to grab transfer talent from the Nittany Lions, but determined leaders like Michael Mauti and Michael Zordich held the team together.

Special Penn State honors are awarded by those with loftier salaries and higher degrees than mine. But as for me, I’m tipping my proverbial hat to this year’s Blue Band, especially the seniors. And I’m thanking them for enacting the lyrics of the song they play so well:  “May our lives but swell thy fame, Dear Old State, dear old State.”