Home » Town and Gown » Neighbor to Neighbor: ‘Cleansed by Fire’ Neighbor to Neighbor: ‘Cleansed by Fire’ “We thought we were done,” says Bill DeBoer, reflecting on the fire that nearly destroyed Brown Dog Catering, the business he owns and operates with his wife, Kristin, in Philipsburg.

“We thought it was over – that’s the end of Brown Dog. I was honestly thinking, ‘Where can I start applying for a job in COVID?’ That was my first thought. Because we have to keep going. I honestly didn’t think about insurance. It didn’t cross my mind.”

The DeBoers relocated their business to downtown Philipsburg in July 2017. The couple had been hosting pop-up events and serving Sunday brunches. They were putting the finishing touches on the dining room in anticipation of opening a full-time restaurant when, in early May, a little leak in the roof of the building caused a can light to ignite, catching the kitchen and apartment above the space on fire.

“The tenants upstairs called, and we came racing over,” Kristen recalls. “We live just a few blocks away. Tyler [Walstrom], who owns Rock & Ruthless Tattoos, was out back with a garden hose before the fire company got here, because he could see where the fire was shooting out from around that back window in the kitchen.”

The DeBoers’ first thought was that the stove had been left on and was just burning off burnt-on grease.

“It honestly didn’t look like much when we first arrived,” says Bill. “It was a little smoky at the top, but nothing crazy. Then we realized there was no light coming from the back window. The whole room was filled with smoke.”

The fire, it was later determined, had likely been smoldering for hours.

“It was almost a total loss,” Bill says.

It happened that Todd Thompson of Mammoth Restoration was returning from State College when he saw the smoke and stopped.

“Out of the kindness of his heart, he boarded up the building so no one could get in there and mess with our stuff,” says Bill.

The DeBoers took a little time before considering what to do next.

“It took us like a week to snap out of it,” says Kristin. “We didn’t really leave our house or do anything for about a week, because we were in shock and thought all of our hopes and dreams had burnt up in the space of an afternoon. We have really good friends and neighbors who took care of us.”

Thompson and his son Colin worked with the DeBoers to get their business back up and running.

“[Todd] was with us the whole way and kept telling us, ‘Don’t worry, we got this, we got this. You’re going to be OK,’” says Bill.

Kristin says with the apartment above the restaurant, she and Bill had the opportunity “to tear it down and start fresh, and Todd managed to take all of our out-there ideas and bring them together and make a really spectacular apartment.”

The front portion of the building, where the dining room is, was relatively unscathed, except for some smoke and water damage.

“We spent weeks pulling things out and washing them off, one at a time,” Bill remembers. “We have hundreds of cookbooks we managed to rescue. Thank God, [because] some of them are my mom’s, some of them are [Kristin’s] mom’s. So it’s not just stuff, it’s almost like a home.”

Looking back, the fire came at the perfect time for the DeBoers, whose plan to finish remodeling the space has been fast-tracked.

“In May, had we been heading into a normal wedding season with catering, if [COVID-19] not been around, we don’t know what we would have done,” Kristin says. “It was devastating, but at the same time, it couldn’t possibly have happened at a better time.”

The DeBoers credit their friends, relatives, the Philipsburg Revitalization Corporation, and others for their help and continued support.

Brown Dog was started in a Penn State fraternity, where Bill worked for 10 years.

“When the early [fraternity brothers] found out about the fire, within three days, they sent us a check for $6,000,” Bill says. “They literally bought all the furniture. We sat at the table and cried.”

“When we started posting that we were going to reopen, it was just this huge outpouring of, ‘Oh my gosh, you’re coming back, that’s so awesome! I can’t wait!’ and [the community] has really shown up and supported us since we’ve opened back up,” says Kristin.

“I think we were cleansed by fire,” Bill says with a smile, lounging in Brown Dog’s bright, cheerful dining room that is now open as a coffee shop and restaurant. “We had a five-year plan to finish remodeling. We no longer have to worry about that. We’ve got real furniture. We can just focus on food now. We can focus on cooking and doing well and taking care of our customers. And there’s no other word to describe it other than this massive sense of relief.”

Brown Dog is open from 7 a.m.-noon every day for coffee and breakfast, and from 5-9 p.m. Tuesday-Saturday for dinner. Reservations are recommended. Braving the Elements: When the weather outside is frightful, these workers face it head on

Winter has arrived in Happy Valley, bringing with it that special central Pennsylvania blend of gray skies, extreme temperature swings, and precipitation that can range from snow to sleet to […] 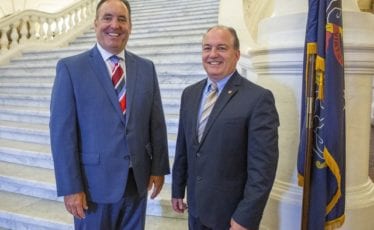 There are four major pillars that hold up the impressive dome of Pennsylvania’s beautiful Capitol. Within those pillars are little alcoves that feature life-size statues of important state figures, symbolizing […] Spud Marshall, innovation director of 3 Dots Downtown, describes the Awesome Foundation Grants this way: “The idea behind it is you get a few friends together, each put in […]