After closing in the spring because of the COVID-19 pandemic, the Allen Street Grill reopened last week with a refreshed look and a new approach to its food and beverage menus.

‘We started the renovation project in June and we’re really excited to unveil it to the community, albeit during a very interesting time to be opening a new restaurant,’ said Jeff Sorg, CEO of Pat Croce & Company. ‘We’ve opened quite a few restaurants but never during a pandemic. It’s been an interesting time but we’re excited to get the place finally opened.’

The updates to the nearly 50-year-old fine dining establishment are the first part of a long-term investment plan by Pat Croce & Company, which late last year bought the Hotel State College businesses at the corner of South Allen Street and West College Avenue. The property also includes The Corner Room, Bill Pickle’s Taproom, Zeno’s, Chumley’s, The Basement Nightspot and a 10-room hotel.

Both Sorg and President Michael Croce are Penn State alumni.

‘We’re really excited about the quality of what we’re putting together and I think we have a really strong team that’s excited about that,’ Sorg said. ‘For us it’s about quality, consistent execution and just focusing on that because we do believe in the future of this industry, this corner, and the community. It’s also a project that becomes a cornerstone for us to say, ‘See, this is our first project of many on the corner and in town,’ so we wanted it to be something our team could be excited about.’ 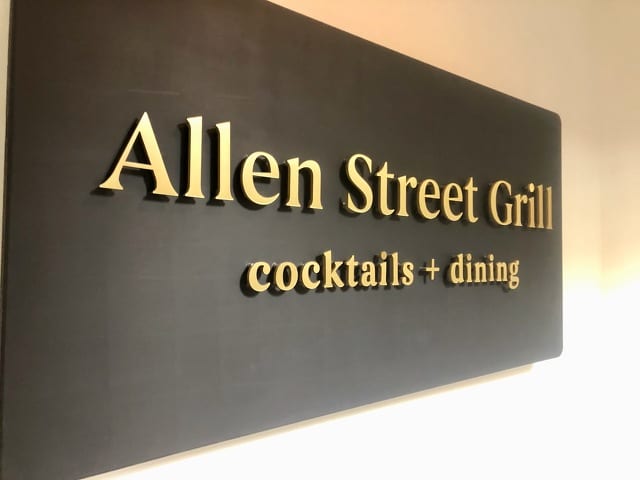 The Allen Street Grill reopened in September 2020 after months of renovations. Photo by Geoff Rushton | StateCollege.com

Inside the Allen Street Grill, diners will find the same vaunted views overlooking downtown State College and much of the historical character of the restaurant, but with a brighter and more visually appealing aesthetic.

New tufted green booths, architectural lighting, mid-century chairs and new flooring replacing carpeted areas are among the most notable renovations. The restaurant maintains its woodwork and tile floor in the bar area, as well as the facade and brass on the bar, which has a new marble top.

A mural and prints by Philadelphia-based Costa Rican artist Dora Cuenca adorn the walls along with iconic imagery curated over the years by Hotel State College’s previous owners.

‘We wanted to brighten the space, really update it. It needed updating,’ Sorg said. ‘We wanted to keep the historic character in place. We really wanted to create a more inspired space in the front of the house, a more updated visual setting.’

The kitchen also has a modified layout and new equipment. Sorg says its the overhaul of the food and beverage offerings that is ‘the heart and soul’ of the renovation.

State College native Karen Nicolas has returned to the area as Hotel State College’s culinary director and Allen Street Grill’s head chef. She brings with her a 20-year career working at renowned restaurants in places such as New York, Las Vegas, Washington D.C. and Philadelphia.

Throughout the summer, Nicolas created six to 10 dishes a week as she, Sorg and Croce worked to develop a modern American menu that will be seasonally driven.

‘We said we want it approachable but I also wanted to add a little bit of sophistication to it, something that will stand us out a little better but at the same time people will still be able to understand,’ Nicolas said. ‘For me a lot was based on using good product and good execution.’

Gone is the two-year partnership with Spats, the cajun and creole restaurant that merged with the Allen Street Grill when the former closed its 30-year location at the corner of College Avenue and Pugh Street.

‘I think we threw people for a loop on our last change around when we tried to take two iconic restaurants and merge them into one,’ said longtime general manager Becky Burger. ‘I think we lost a few of our Allen Street Grill fans. I believe wholeheartedly that they’re going to come try us and be fans for life.’

But even though that partnership has ended, diners will still find high quality seafood, including Fisherman’s Stew with sea bass, shrimp, clams, calabrian chili and fregola sardo pasta, and the rainbow trout with wild rice, bacon, green beans, almonds and dill sauce.

Nicolas said that because of the work she puts into each dish, it’s hard for her to pick a favorite from the current menu. But she said she particularly hopes patrons will enjoy items not often found in restaurants around town, such as the braised lamb shank with soft polenta, shishito pepper, feta and malbec honey jus. 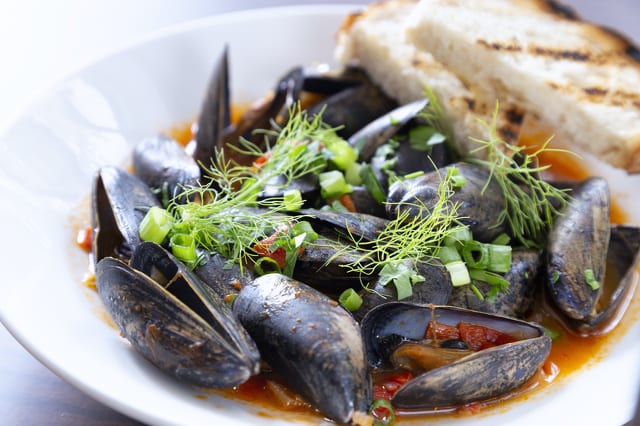 While not a pastry chef by training, Nicolas also took on the challenge of creating a dessert menu she hopes also will help the restaurant stand out, with selections like the whipped lemon cheesecake parfait with wild blueberries, pistachio wafer and vanilla crema. The warm French apple cake and honey cake are both served with ice cream from Wasson Farm.

‘When we got to the final selections and got to the desserts we just threw our hands up and said ‘You pick,” Sorg said. ‘They were all amazing.’

It includes a selection of biodynamic wines, curated beers and ciders and cocktails that emphasize the quality of the spirits.

Biodynamic wines are produced by vineyards that use organic farming methods, with no chemicals or additives.

‘Something I’m incredibly passionate about is biodynamic and organic wines,’ Peters said. ‘We’re working with wines that most people probably aren’t familiar with here. In fact a lot of my small vendors I have to drive back every other week to Philly to be able to keep in stock for here.

While some of the big brewery domestics will be available in bottles, the draft selection also emphasizes quality, with something for every taste. Sly Fox Pilsner, for example, substitutes for Miller Lite on tap. Other drafts currently available include the likes of Allagash White, a wheat beer; Spaten Oktoberfest; and the much-heralded Lawson’s Sip of Sunshine, an imperial IPA, among others.

‘We have a phenomenal beer bar [Zeno’s] two floors down from us,’ Peters said. ‘We’re not going to be a beer bar. But what we are going to do is it’s going to be quality from start to finish. We’ll have a style everyone can get behind and be happy to drink.’

He added that cocktails are inspired by classics from around the world, such as an Old Fashioned and the Vesper Martini, signature drinks like Sunkissed Collins and White Negroni, and seasonal drinks like Pisco Sour and Tinto de Verano.

‘What we try to do really, just like with the wine and beer, is it goes back to quality… Something simple but the ingredients are really good,’ he said. ‘Someone put a lot of time into making that spirit… We’re not going to mask it. We’re using brands that I’d be happy to drink.’ Burger said that the skills and ideas brought by Nicolas and Peters along with the physical renovations have her excited about the future of the Allen Street Grill and Hotel State College under the leadership of Sorg and Croce.

‘I am just so thankful,’ she said. ‘This is my home. I love this building. I love our restaurant. I love all the faces we’ve gone through. But I feel like we have come to a brand new level we’ve never seen.

‘I can’t say enough about the love that has been added to this building. We fought against ourselves so many times in the past when we were busy, with old equipment and old furniture and things like that. They’ve given us everything to be successful now. I’ve got my team that loves the place and has worked hard over the years to maintain our standards. We’ve taken our standards up a level and they’re right there appreciating everything we’ve been given.’ The Hotel State College properties, including the Allen Street Grill, were purchased by Pat Croce and Company in late 2019. Photo by Geoff Rushton | StateCollege.com Local faith leaders have organized a vigil to bring the Centre County community together in solidarity against hate after multiple places were vandalized with a white supremacist group’s recruitment propaganda last week. Penn State hockey beat Michigan State 3-1 on Saturday afternoon for its first series sweep of the season and seventh win in nine games after starting the season 0-5. The […] Three more businesses in the Nittany Mall are shutting their doors early this year. Christopher & Banks, Hot Topic and Kozee’s Sports Emporium each recently announced through store signage and […]