Home » News » Local News » Green Gold: ‘The Prince of Loggers,’ Bellefonte’s John Ardell Jr., Was a Keystone of Pennsylvania’s Timber Market
Sign up for one of our Newsletters! 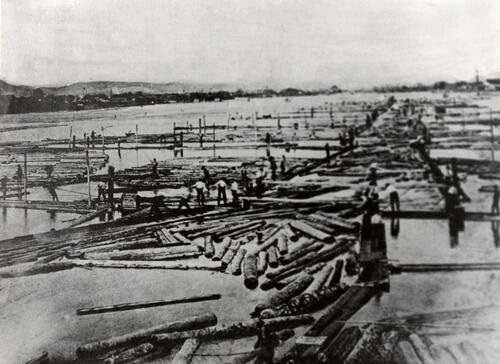 Covering 90 percent of Pennsylvania’s nearly 30 million acres, forests served as “green gold” to her early colonists. Timber provided stability to Pennsylvania’s economy, just as it did for the structures it built. As America grew, timber fueled progress. The logging boom of the 1800s was at the heart of America’s industrial revolution, and the logger barons who controlled the trade would shape Pennsylvania for years to come.

“Green Gold” was one of the most lucrative industries in 19th-century America. In central Pennsylvania, Juniata Iron was earning worldwide renown as producing some of the highest quality on the market. In the Juniata Iron region alone, 48 forges and 42 furnaces were in blast by 1850, requiring anywhere from 300 to 350 acres of timber annually to operate. Timber also remained the most popular building supply nationally, and demand for specific softwoods and hardwoods made for a booming seller’s market.

Arriving in Bellefonte in the early 1850s, Ardell worked quickly to get involved in the area’s timber industry. In 1874, he acquired logging rights in the Beaver Mills area in Black Moshannon, some 8,000 acres for $125,000. From there, his empire would explode.

Much of Ardell’s business was centered on “log driving,” or “floating” the timber down creeks feeding the Susquehanna. This technique required skilled logging teams to trail the logs downriver, guiding and unjamming, often at the expense of their own safety. Ardell had the logs floated to Williamsport, where they could be cut into boards and sold.

His empire grew so quickly that, by 1881, Ardell was contributing more than 40 million feet of timber annually and often had stores of timber waiting to be floated at the next rise of water level. Exemplifying this, in 1876 Ardell had 50 million board feet beached at Mosquito Creek (near present-day Pine Glen), immovable until the creek rose enough for a proper log drive.

The numbers associated with Ardell’s operation were staggering. His operation spanned five counties, consistently employed hundreds of workers, and was in constant expansion and fierce competition. By the mid-1880s, Ardell’s mills provided around 10 percent of all lumber from the region. Additionally, they were a very fruitful venture, providing pre-cut boards to local buyers. Ardell’s Star Mill in Black Moshannon cut more than 4 million board feet a year alone!

The need for a lumber yard became immediately apparent, so in the late 1890s Ardell purchased a plot by the match factory in Bellefonte for lumber storage. As a testament to his wealth and influence, Ardell had his stately mansion built on Linn Street in Bellefonte, a structure of Second Empire design and intricate interior features that not only housed his family, but also served as a center of operations.

The timber business, though extremely lucrative for lumber barons like Ardell, was often a source of controversy for the communities in which it operated. Environmental concerns, highlighted by pioneers in the forestry field like Dr. Joseph Trimbull Rothrock, were becoming more apparent to the public. In 1895, Rothrock was named commissioner of the newly formed Forestry Division of the Pennsylvania Department of Agriculture and set about purchasing the lands surrounding old furnaces that had been stripped bare to revitalize dwindling forests.

Aside from governmental pressure, lumber barons commonly also found themselves embroiled in legal disputes. In 1893, Ardell even squared off against well-respected former Governor and Civil War veteran James Beaver in a series of suits and countersuits over a will, for compensation worth more than $1 million today. Ardell was certainly a force to be reckoned with.

Today, Pennsylvania’s vast forests are celebrated and protected, with one-third owned by federal, state, and local governments, and only 3 percent held privately within the forest product industry, a legacy attributed to the “Father of Forestry,” Joseph Rothrock.

Ardell, the Prince of Loggers, would remain in Bellefonte for the rest of his life, continuing to provide lumber for most turn-of-the-century building projects in the community. His family home now serves as Our Fair Lady Bed and Breakfast, where Ardell’s opulent taste and timber wares can be viewed in the marvelously restored manor. His story is a hallmark of Pennsylvania’s industrial past and the fever for Green Gold.

This story appears in the June 2021 issue of Town&Gown.

Woods., C. J. (n.d.). A history as strong as the trees it protects. Retrieved from https://pabook.libraries.psu.edu/literary-cultural-heritage-map-pa/feature-articles/history-strong-trees-it-protects

Various selections from the Centre Democrat (Bellefonte), Altoona Tribune, The Indiana Progress, and The Times (Philadelphia).