The Patton Crossing commercial and residential development is moving forward.

‘We see this development as a being a place where people live, work and shop,’ architect John Crouse said. ‘We also see this as… a place to go in Patton Township.’

Approval of the master plan marks a milestone in the project’s development, coming more than two years after 1752 North Atherton Associates — led by developers Bob Poole, Ara Kervandjian and Heidi Nicholas — requested rezoning of the land for mixed-use. A much-debated new mixed-use zoning ordinance to be applied to the site was approved by the township in 2018 and the developers have been discussing plans at planning commission and supervisors meetings throughout this year.

The master plan includes 20 buildings to be constructed over up to 12 phases, with residential and commercial/retail that is expected to include a hotel, grocery store, restaurants, office space and shops. According to the planning materials, ‘a diverse use of land is planned allowing for small scale, locally owned businesses within the development.’ Three parking structures and street level parking are also included.

In the back third of the development will be a public plaza and gathering space that can be used for events such as farmers markets and festivals. That area also will include a ‘landmark’ structure, which has not yet been designed, but which Crouse said is intended to ‘be a draw coming in off of Atherton, to draw you up the hill to the plaza.’

Poole said the plaza is a key feature of the concept for the site.

‘From the beginning what we were trying to do is what we call a town center concept, where the plaza is kind of a key center to what we’re doing, surrounded by residential, commercial, retail,’ Poole said.

By ordinance, the master plan is required to include a timeline for phasing but the developer is not mandated to build within a certain timeframe. Supervisor George Downsbrough noted, for example, that the Toftrees master plan was approved in the 1970s and less than half of it has been built out.

For Patton Crossing, the plan timeline is for buildout to take place over about 25 years. That led to some resident questions about only a portion of the project being built and the remainder of the site being undeveloped and aesthetically unappealing for years afterward. One resident said that according to the timeline it could be 15 years before the plaza is built and 20 before most of the housing is constructed.

Poole said the timeline in the plan is a conservative estimate but that they want to see the entire project built much sooner.

‘I’ll tell you Ara and Heidi and I hope that’s four or five years,’ he said. ‘We’re going to work extremely hard now. We have already talked to two large firms to help us market it and get it ready. We know, if we want to maximize our value and create what we want to create, we know that plaza is important. Nobody wants to get to that plaza faster than we do.’

He added that the developers want to have the right mix of businesses come into the development.

‘We don’t create the demand. We satisfy it. People will call us, we’ll call them and try to bring them,’ Poole said. ‘We also care about the mix. We could fill that up faster, but we want a mix of restaurants, a mix of local people… you’re going to want that at the end also. You can always make something fill up faster just by putting anything in there, but that’s not what we’re trying to do.’

Township manager Doug Erickson said that while there’s no mechanism to force construction of a building, the developers have already invested significant money in buying the land and they’re motivated to start profiting from their investment.

‘There’s no value to them to let it sit fallow without being developed,’ Erickson said.

Most of the trees on the property will be cut down, though new plantings will be placed throughout the development and along the perimeter. A condition to the approval is that 75 percent be native species. Two residents expressed concern that after the site was graded and first phase was built, the rest would be a ‘mud field’ pending future development.

Tony Fruchtl of PennTerra Engineering said that developers are required by law to ‘stabilize’ the remaining land until future development occurs and that it will be a grassy area, not a mud pit.

‘There will be some type of grass that has to go in there,’ he said.

Poole said the plan is to develop the site starting along North Atherton Street and move toward the back of the property over time.

At the front of the property are one-story commercial/retail buildings, one of which may become two stories. That will be the first phase, which Poole previously said is expected to begin construction in January 2021. Before construction begins, supervisors will have to approve formal land development plans.

Behind those is a five-story, 140-room hotel, which is expected to be part of phase two or three. Nine commercial-residential buildings will be four stories, with first-floor retail and apartments on the remaining floors. Three four-story buildings will be residential only.

A stormwater detention area will also have a recreational space with features such as a volleyball court and picnic tables.

A bike path will run through the site, connecting from Park Forest Avenue to Atherton Street. A cut through at the south end of the development will connect to the neighboring former Temple/Franklin Manor Mobile Home Park, where developer Waters Retail Group is planning another mixed-use development.

The main vehicle entrance to the development will be on North Atherton Street at the intersection with Woodycrest Street.

A traffic study recommended two left turn lanes, a straight thru lane and a separate right turn lane all for exiting the property. On Atherton Street an eastbound right turn lane would be added to turn into the site and westbound to turn right onto Woodycrest Street. The traffic study will need to be reviewed by the township and PennDOT during the land development plan phase and the improvements will require state permitting.

The only motor vehicle connection to Park Forest Avenue will be a gated access road for CATA buses and emergency vehicles.

While there is much work to be done, Poole said he is looking forward to developing a unique community destination.

‘When we first started we came here and we’re going to live up to what we said,’ he said. ‘We want this to be something that’s really attractive. Downtown [State College] is great; it’s become more student-oriented. I think this is going to be something really, really neat for our community.’ An artist’s rendering of the proposed Patton Crossing development looking from the North Atherton Street side to the rear of the property. Image by Saunders & Crouse Architects via Patton Township. 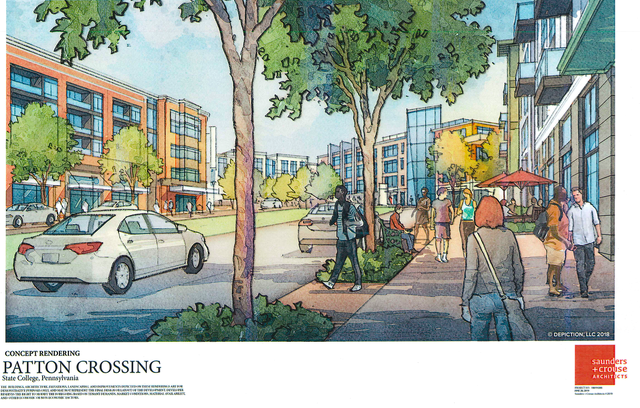 An artist’s rendering of the proposed Patton Crossing development looking from the North Atherton Street side to the rear of the property. Image by Saunders & Crouse Architects via Patton Township