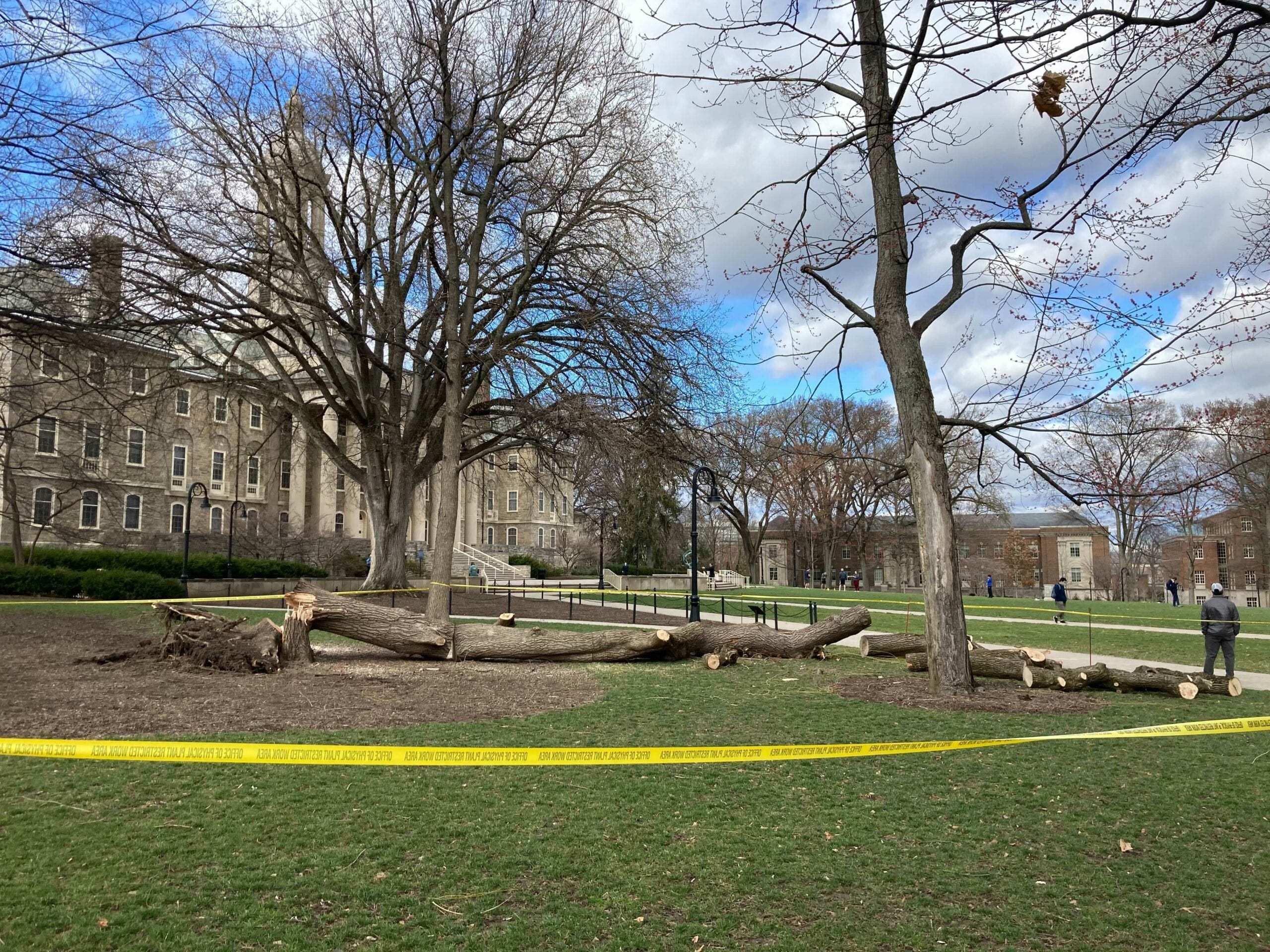 Old Willow, whose storied history can be traced back to the late 1850s, was knocked down by wind gusts. Crews were on-site near Old Main to assist in cleanup efforts and eventually begin chopping up the tree’s remains.

“The loss of the Old Willow is a tremendous loss for campus that is tied to a long tradition,” said Bill Sitzabee, Penn State’s vice president of facilities management and planning and chief facilities officer.

The tree was a third generation descendant of the original Old Willow. According to the university’s Office of the Physical Plant, Penn State arborists took “extra precautions” to ensure obtained cuttings from the fallen tree would survive. Those cuttings will be used to grow the fourth-generation Old Willow, which will be planted on campus once one reaches a mature height and with input from the University Tree Commission.

Although the legends disagree on exactly how the landmark began, the most widely accepted says Old Willow grew from a cutting obtained by former Penn State President Evan Pugh from the home of British poet Alexander Pope. It was planted on campus by Professor William Waring in 1859 and Old Willow quickly became known as one of Penn State’s first historic symbols.

This isn’t the first obstacle Old Willow (and its ancestors) have faced. It’s been replanted twice over the years using cuttings from the very first tree, which fell during a strong storm in August 1923. The second generation grew through the late 1970s, when it was replaced by the most recent one on Old Main Lawn.

In 2014, Old Willow was honored with a new landmark plaque that delves into its history a bit more. It reads:

For decades, freshmen bowed to Old Willow as Penn State’s oldest living tradition. Legend claims that when Penn State’s first president, Evan Pugh, returned from a six-year sojourn in Europe, he brought back an off-shoot of a willow from the famous garden and grotto of English poet Alexander Pope. This sapling was planted on the Allen Street Mall, near Sackett Building, by Professor William Waring in 1859. Waring was the first superintendent of farms and grounds and was charged with the layout of roads, buildings, orchards, and landscaping. After wind felled the tree in 1923, an off-shoot of this tree grew until the late 1970s, when this third-generation tree was planted.

A handful of Old Willow’s descendants can be found at the Arboretum or even the homes of some former Penn State trustees, including Anne Riley and George Henning.

Curtis Runyan, an OPP horticulture supervisor, said willows grow fast, and a sample substantial enough to survive “the busy university environment” could be ready in four to five years.

“The tree with the nicest form will be selected to be used on campus,” Runyan said. “Since it is a rooted cutting, it will be a clonal variety to carry on the tradition.”

Centre County was under a wind advisory through early Friday evening with winds of 25 to 30 miles per hour and gusts of up 55 miles per hour. The winds resulted in downed trees and power outages throughout the area.