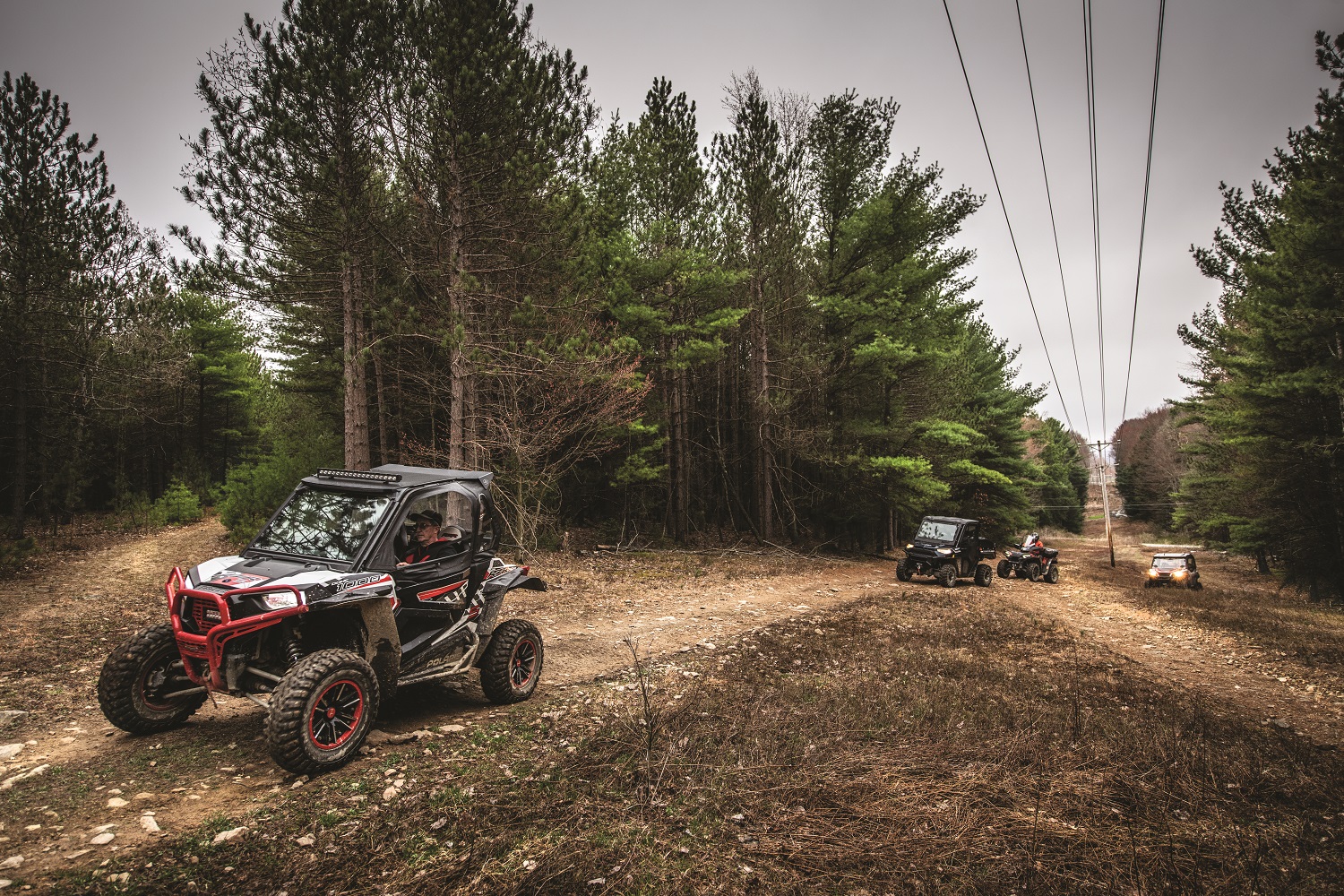 Engines rev all year long in the Mountain Top area on the Snow Shoe Rails to Trails system, and the trailheads are open for you to come join the fun.

Come ripping, come riding, with your membership sticker and your gear.

Bring friends, bring family, and bring a sense of adventure, because the trails stretch from Philipsburg to Snow Shoe and beyond.

The trails are open to walkers, bikers, and those riding horseback, snowmobiles, and all-terrain vehicles. While all are welcome, ATVs and UTVs (utility terrain, or task, vehicles) are the most common sights rolling through the mountains in Snow Shoe.

The trail system offers views of the Mountain Top landscape, a ride through a railroad tunnel built in the 1800s, and connections to state parks and forests. Keep your eyes peeled as you roll along, for you might spot a deer or an eagle, or maybe even a rattlesnake. Riders can connect with a new trailhead in Philipsburg that offers amenities such as restaurants and a gas stop just off the trail.

So, head on up for the day, or pack the camper and spend the weekend. Either way, you are bound to make some new friends in the process, because the crew of volunteers at the Snow Shoe Rails to Trails Association is working to keep things safe and family-oriented, while also expanding the trail system to bring more riders to the area.

It all started back in 1993, when Conrail decided to discontinue 19 miles of the old Snow Shoe Industrial Track rail line. Realizing the land provided an opportunity for recreational use, Headwaters Charitable Trust worked with Conrail to railbank the track.

Railbanking is a federal program established in 1983. It allows private organizations or public agencies to redevelop abandoned railroad lines and use them for public trails, while “banking” them for possible future railroad use.

Larry and Trilby Mayes’ property runs right up to the railway. When it was first discussed, a trail sounded like a great idea to them, except that most rails-to-trails projects do not allow for motorized uses.

People had been riding their ATVs on that rail line for years, and they didn’t want to get squeezed out of this opportunity.

“They said they were going to turn it into a hiking, biking, walking trail, this Headwaters Charitable Trust. We said, ‘Well what about four-wheelers?” says Trilby Mayes, who serves as SSRTA president. “They said, ‘No motorized vehicles.’ So, we said, ‘We’ve got to fight this.’”

After all, there are not many well-maintained public places to ride ATVs and UTVs, and it is something that many people in the area love to do.

So, the Mayeses and a group of like-minded residents started attending the meetings about the project, trying to explain what the potential rail trail could mean to local riders and the greater community.

“They were looking for a core group to maintain the trail, and I said, ‘What about us?’ We have little quads and we’ve been riding even when the train was running,” says Trilby. When they were informed that the trail could be fenced in to keep ATVs out, Trilby told Headwaters Charitable Trust, “Well, you could do that, but up here everybody has a skid steer and equipment. … There will be a lot of holes in that fence.”

Headwaters offered a potential solution that could work for everybody. If advocates came up with a plan to organize the riders and keep things safe, ATVs would be considered on the trail.

The Mayeses say they looked at The Rail-Trail Council of Northeastern Pennsylvania, which manages the D&H and O&W trails near Scranton. The nonprofit works to maintain and grow the trail system that brings in tourists to the area, something that was seen as possible in Snow Shoe and the surrounding areas.

“We fashioned ourselves after them,” says Trilby.

The Snow Shoe Rails to Trails Association became the official trail manager in 1999. The initial group was composed of 85 members; it has now grown to include nearly 4,000 members from 10 states. Membership, which can be purchased (for $20 per motorized vehicle) at many area businesses, allows riders to access the trail system. The association works to keep riders in line and safe.

The partnership worked well, and in 2012 Headwaters Charitable Trust transferred ownership of the trail system to the very people who manage it, the SSRTA. Through the work of volunteers, the association continues to monitor and grow the trails as a haven for people looking to have a good time on four wheels.

Larry Mayes serves as secretary of SSRTA. He sure has a lot of stories, and he is happy to share them with anyone who asks. Stop him at the trailhead and he might tell you about a ride he took on a trail in another part of the state, or a couple he met last weekend who drove from Ohio to ride on the Snow Shoe trail.

Larry is proud of all the volunteers who come out to help maintain the trails, including “Mary and Gary Halsnick, who schedule the work details and log work needing done,” and Andy Basalla, who “is one of those volunteers that is always there to help out.”

Larry loves to talk about all the support the association has received from businesses that are corporate sponsors. He speaks with pride about all the groups, such as the Boy Scouts and Centre County Probation, that come out for community service. The groups help with maintenance, trail work, and trash pickup, even helping keep local highways clean.

Yes, the Mayeses act like the people on the trail are one big family, and because of that, it seems like everyone out there follows suit. During big fundraising weekends, such as the annual Best Line Powersports/SSRTA Chicken BBQ in July and the Carns/SSRTA Annual Pig Roast in September, the Gillentown Trailhead in Snow Shoe Township turns into something of a riding family reunion. Friends ride all day and then catch up at night for dinner at the fire pit and an evening of telling stories from the trail.

During any weekend of the year, folks can be seen pulling their trailers to the trailheads. They may stop for gas and food, and perhaps at a local dealership to buy gear or equipment they need, boosting the local economy.

At the trailhead, bricks memorialize SSRTA members who have passed away, keeping the family connection from generation to generation.

Nowadays, larger side-by-sides and UTVs allow riders to team up in groups of two, three, or four. Some of these new machines offer more bells and whistles than a car.

Riding is something that can be done by people of all ages, and the association works to keep the trails safe for all involved. Rules include that all vehicles must be state-registered and carry insurance. There are speed and weight restrictions, and expectations to follow when passing others. Dirt bikes are not allowed because they cannot be state-registered.

“Be respectful, that’s the main thing,” says Larry, adding that most people are. The association teams up with the Centre County Sherriff’s Office to monitor the trails.

Riders ages 8 through 15 must possess a state Department of Conservation and Natural Resources Safety Certificate and be out with someone who is over 18. SSRTA has four trainers who are certified to teach the course, offered at four locations: Carns Equipment in Clearfield, the Elks Club in Philipsburg, Best Line Powersports in Centre Hall, and Dotterer Equipment in Mill Hall.

“You don’t slow down, because the log is going to roll right with you,” says volunteer Beth Watson. Her husband, Mark, is one of the certified trainers.

“They also teach the law, they teach to respect the forest and our property owners,” Beth Watson says. “And they teach them not to litter and if you see litter along the road, take an extra bag and bring it back in with you.”

Down in West Virginia, there is a legendary ATV system called the Hatfield-McCoy Trails. Riders are connected to different levels of trails through towns that allow for extended ATV trips, with access to gas, food, and lodging. ATV riders speak of it with reverence.

The trail system here is nowhere near that level, but the SSRTA continues to expand it and make more connections to local businesses to bring it closer to that status.

The Hatfield-McCoy Trails encompass “a huge place where you can drive right into restaurants and into town and fill up your machine in town, drive right up to a hotel; it is amazing,” says Barry Kellerman, from Truck Stuff and More LLC in Bellefonte.

Kellerman says he sees many people coming into his business who are in the area to ride and need something new. If more connections are made, it would bring in even more people supporting local business, he says.

“It would be huge for the local economy if people could drive right into town to go to these businesses,” says Kellerman.

In 2011, with the help of state Representative Mike Hanna and the Snow Shoe Township supervisors, the trail made a connection to the Bloody Skillet ATV trail in Sproul State Forest near Orviston. The Bloody Skillet Trail has 37 miles of old coal roads in the forest that are available for ATV use. Unlike the SSRT, the Bloody Skillet is closed to ATVs during the winter months.

The association has worked with Snow Shoe Township to allow for safe riding on many of its roads, helping the rail to trail make more connections. Riders have to follow the rules of the road and are allowed to travel only from point to point on township roads.

For Rodney Preslovich, chairman of the Snow Shoe Township Board of Supervisors, the access on the road makes sense, helping bring more people into town.

“It means a lot for the businesses and everything. When we first started this, we had some people who were skeptical that didn’t want it, but I haven’t had people complaining in a while. … Even last year, when we added 10 or 12 roads … there is not a lick of trouble,” he says.

A plan to expand the trail to connect the Bloody Skillet Trail to the Whiskey Springs Trail in Renovo has stalled, so the group has since worked to expand in the other direction, making the connection to Philipsburg stronger.

In 2019, a new trailhead was constructed at the Philipsburg Elks Lodge & County Club, allowing for a new access point to the western section of the trail. The access allows riders to stop at the lodge or the nearby We Are Inn for food and to fill up with gas nearby.

“It is wonderful to have this connection and it is good for them, too. We stop and fill up the whole place for dinner and get gas; it is great,” Larry says.

The association continues to work with Rush and Morris townships to provide more local access points and connections to that side of Centre County. A recent addition allowed riders to reach Black Moshannon State Park by Casanova Road, allowing access to the park concessions and the lake for fishing and swimming.

So far, more than 27 miles of municipal roads have been connected to the 19-mile rail trail. With the connection to the Bloody Skillet Trail, there is an 80-mile trail system where riders can spend hours before heading back to the trailhead.

“You might come out with all your friends, but you will meet the nicest people on the trails. … It is a fellowship, a group of people from all over who come here to ride,” says Watson. “When we are standing there selling chicken barbeque and people are coming in, it is like seeing your family again, because it is a family-oriented trail.”

For more information on the Snow Shoe Rails to Trails Association, visit ssrt.org.