Home » Town and Gown » Building a Community of Artists: The Artery is about to come to life in downtown Philipsburg Building a Community of Artists: The Artery is about to come to life in downtown Philipsburg 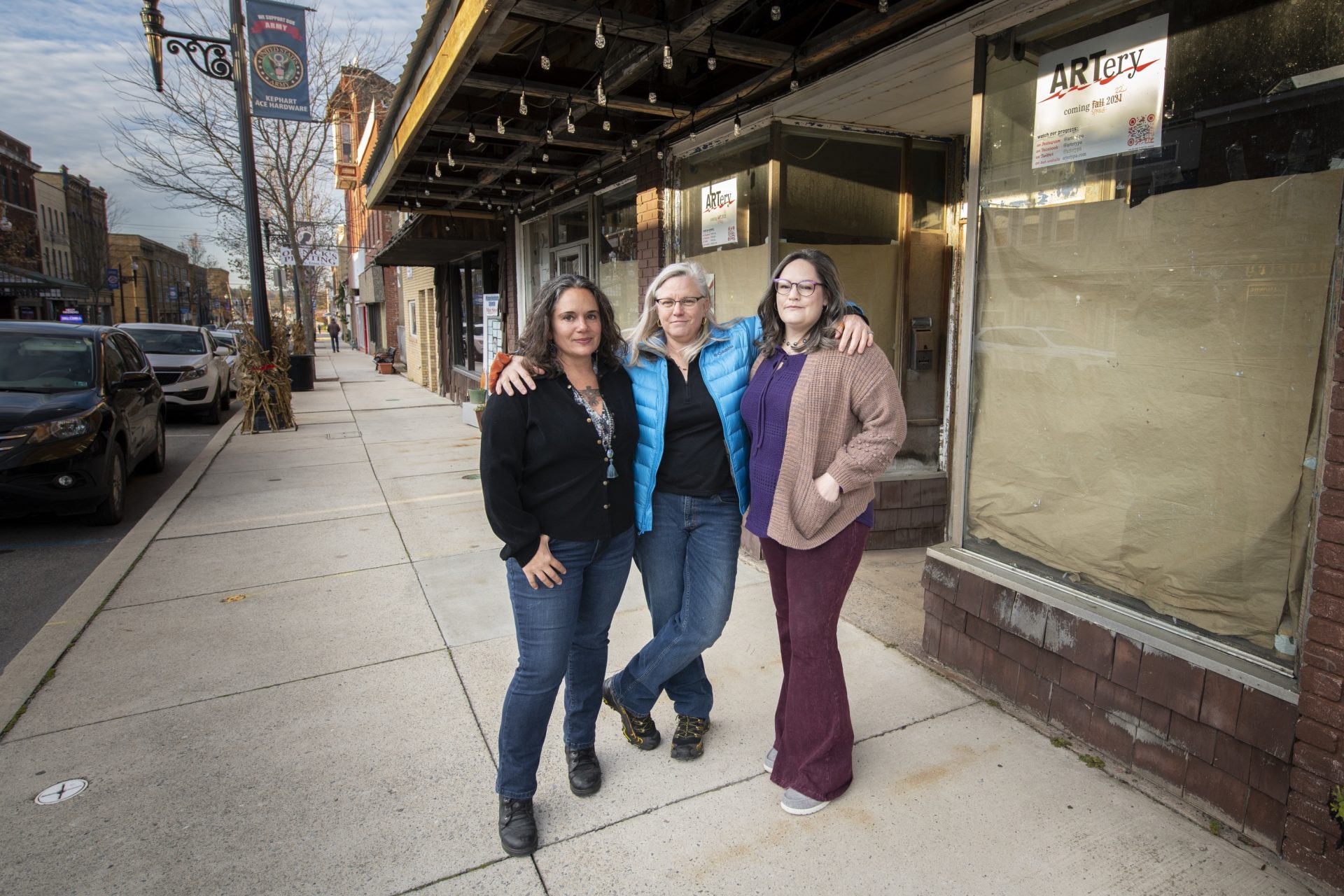 Lynn Anne Verbeck (left), Adrienne Waterston, and Melissa Heartsong outside the ARTery, which is slated to open in the spring of 2022. (Photo by Darren Andrew Weimert)
By Teresa Mull, Town&Gown - December 7, 2021
Artist of the Month | Town&Gown

A pair of local artists, Lynn Anne Verbeck and Adrienne Waterston, have lived colorful, unconventional lives. Both reside in Philipsburg now, and they’re bringing their eclectic experiences together to create the Artery: an arts space on Front Street they hope will continue the downtown’s momentum by drawing in diverse creators and building a community of artists unique to the region.

The making of an artist

Waterston’s foray into the art world was not a straight line.

“I have been interested in lots of things in my life and had always taken art classes,” she says.

Waterston was raised mostly in St. Louis. In high school, she was recruited by The Art Institute of Chicago, but chose instead to earn a degree in American history from Columbia University. After graduation, she went to work for a politician.

“[My employer] had hired someone to do her graphic design stuff, and I thought, ‘Oh! Graphic design. People get paid to do that?’” Waterston recalls. “It never occurred to me. It just didn’t seem possible.”

Waterston was told she had to go back to school for four years if she wanted to be a professional artist, to which she responded, “No, I don’t think I do.” She worked for a printer for a while, “back before computers were really involved in design at all and were just getting off the ground.”

Waterston made inroads in the art community by working for a “software package design guru” who started a magazine and hired Waterston as an editorial assistant.

“It was nothing super-glamorous, but it was big names, and I got introduced, through the magazine, to designers all across the country,” says Waterston, adding that one of the artists was a renowned illustrator at Penn State.

Waterston and her husband eventually made their way to central Pennsylvania to raise their children, and when the kids were in school, Waterston had some extra time on her hands.

“I took some art classes at Penn State and thought, ‘I need to do this. All the time,’” she says.

Waterston has made a name for herself as a silkscreen artist at the Art Alliance of Central PA in Lemont and with exhibits at Schlow Centre Region Library, The State Theatre, and elsewhere.

Waterston describes her inspirations and subject matter as “all the things, all the time,” and her artwork is a reflection of her musings on all things life.

‘I just felt so free’

Verbeck reflects on her childhood growing up in Philipsburg with amusement.

“I was always the ‘different’ one around here,” she says. “I checked all the boxes – I was president of the student council, I was a cheerleader, but I always had bold fashion statements and blurred all those social lines in school. I think I set a record for wearing black 28 days in a row – all these different outfits.”

After earning all her regular credits at Philipsburg-Osceola High School early, Verbeck took some drafting classes at the vo-tech, with an interest in architecture.

“I couldn’t wait to leave here, so I made that happen,” she says. “I couldn’t see the beauty of it when I was in it. What I learned over the years was you need to step away to realize what you have, so to speak. So I absolutely adore being [in Philipsburg] now, but I don’t think I would have ever been content unless I did my roaming.”

Verbeck went to Penn State “against my will” (her mother was employed there, and Verbeck got a steep discount), with plans to become a fashion designer. Studying film, however, became a “balance” her father accepted as more practical, and which Verbeck considered “still artistic.”

“I settled into that degree and had a blast,” she says.

Verbeck painted a lot, but always wanted to try her hand at ceramics. P-O didn’t offer ceramics, and she just managed to take a few classes as electives before graduating from Penn State.

Then, it was onto the sort of free-spirited lifestyle many of us envy when we watch movies.

“There were seven of us in the film school, and we all graduated, we all started a rock ’n’ roll band, and we all pilgrimaged to New York, and it was fantastic,” Verbeck says. “We were supposed to get settled, get your apartment, and then meet up, and we were going to practice, and we were going to take over the world, living in Greenpoint, Brooklyn. So we did that! We all found our way there. I just felt so free.”

Verbeck had finally gotten into clay her senior year at Penn State, and still credits her “wonderful professors” with encouraging her to pursue art. Fate followed Verbeck to NYC, where her landlord, who used to “throw pots” himself, paid to have the $100 kiln she’d bought from her mom’s friend wired and set up in her loft apartment.

“We had a big sheet I’d set up to waft the fumes out the windows,” she says.

A bright-eyed and eager Verbeck made many connections in the New York arts scene, where she wasn’t shy about “asking a million questions.”

“I just learned on my own and started making pots, and we were making music and films and living that bohemian art lifestyle in New York, and it was awesome, you know?”

Verbeck’s journey led her to a job at Long Island University in Fort Greene, Brooklyn. She was offered a teaching position by “an amazing Japanese guy – Shumpei Yamaki – who came to the States to be a break dancer, but got in a horrible car accident and was told to do pottery as a form of therapy.”

He assumed Verbeck had her master’s in fine arts (MFA), which was required for the teaching job.

Verbeck didn’t even have a bachelor’s in fine arts, but ended up being accepted to the State University of New York (SUNY) New Paltz, where she earned her master’s degree in ceramics. Verbeck says the experience gave her the space “to make whatever you wanted and to think bigger.”

Verbeck says she knew she wanted to return to Philipsburg right after giving birth to her second child during spring break of her thesis year.

“Being up in New Paltz made me crave more nature, more space, more solitude – to let that spaciousness in me sing again,” she says. “That was speaking to me. So I had my son, and I decided to move back. I’m so moved by nature and people and interaction – I love it, and I’m so inspired by it.”

Verbeck had initially wanted to purchase a building in downtown Philipsburg, but “the paradigm hadn’t shifted yet.” Verbeck’s father, who owns the Wagon Wheel Amphitheater on the edge of town, offered her one of his buildings, out of which he used to run a diesel mechanic school.

“It’s freezing in there, there’s like no light, and it stinks like diesel and oil, and it never felt welcoming,” Verbeck remembers thinking.

Verbeck would have to fix the place up herself, and since it was a little out of the way, traffic-wise, and the renovations wouldn’t have been cheap, she decided to turn her home garage into a studio and class space. She’s worked at the Art Alliance, The Makery, LA Clay Studio (her home studio), and elsewhere regionally.

Now, Verbeck says with a laugh, “Everyone’s on board to get me out and into the Artery so they can work on muscle cars.”

Verbeck remembers passing Waterston in the halls of the Art Alliance and thinking, “She’s too cool for me.”

An art show eventually brought the two together, however, and the wheels of the Artery were already in motion for Verbeck, who had been approached about bringing the arts to downtown by then-president of the Philipsburg Revitalization Corporation (PRC), Eric Kelmenson.

Last year, the PRC purchased a pair of dilapidated buildings on Front Street that had fallen into disrepair. Since then, the organization has secured $200,000 in grant funding and donations to rehabilitate the structures into affordable housing units and commercial spaces. The Artery will inhabit half of the downstairs retail space.

“I just combusted!” Verbeck says, remembering how she eagerly shared her vision for the Artery with Waterston for the first time. “We took a hike at Black Moshannon, and we were like, ‘Let’s do it together.’ In like Flynn, baby! I just feel so wonderful to have a partner and to know there’s two of us, and the things we offer, I think they just blend so beautifully together.”

“The plan is to have a coffeeshop in the front with a gallery, so we’ll have regular art shows on the walls, and we’ll have an art shop so local, curated artists in the space can sell small things that are maybe $50 or less,” Waterston adds.

Melissa Heartsong will join the artists in the space to run Heartsong Café.

“Heartsong will be an espresso bar, offering high-end coffee drinks, in-house recipe chai, and bubble teas,” says Heartsong. “We will be offering light fare as well. My intentions are to provide some traditional bakery items, with a nourishing element, using organic and locally sourced ingredients.”

‘In a hurry, but patient’

Waterston says she’s been approached by several people who are curious about when the Artery is going to open. Many of them are eager to contribute their own artistic skills and take part in the diverse offerings the space will provide. Confirmed Friday night pop-up events will include “all sorts of classes,” such as jewelry making and sewing.

Waterston and Verbeck are excited to provide a space for all kinds of artists to create, on their own schedules, by offering 24-hour access to the Artery by means of drop-in memberships.

“The membership is what will set us apart from anyone else in this whole region,” says Verbeck. “In New York, it’s like that. You get trained on the equipment, you get signed off, and then you get your own key fob that can get you in. We will, obviously, have video surveillance and everything. But what a gift! A lot of people can’t just work from 9-5. I know that’s how I work. When I’m feeling it, I want to go in. We’re hoping to have a core following that sustains our business. A community of artists who need a space to work. Painters. Print and ceramics. Anyone’s welcome, really. It will be a place where people can take refuge, and we can make our art and work really well together. Our different tastes will blend together to curate shows and have this thriving metropolis of art, music, open mic, poetry nights. I feel like we can build this community here.”

The ETA for the opening of the Artery is spring 2022; much of the process is dependent on the PRC’s funding stream and work on the rest of the building, though in the meantime, Verbeck and Waterston and their families have been making big progress by rolling up their sleeves and renovating the Artery space themselves.

“I feel so overwhelmingly blessed and grateful,” says Verbeck. “We’re in a hurry, but patient. We’re going to enjoy the process.”