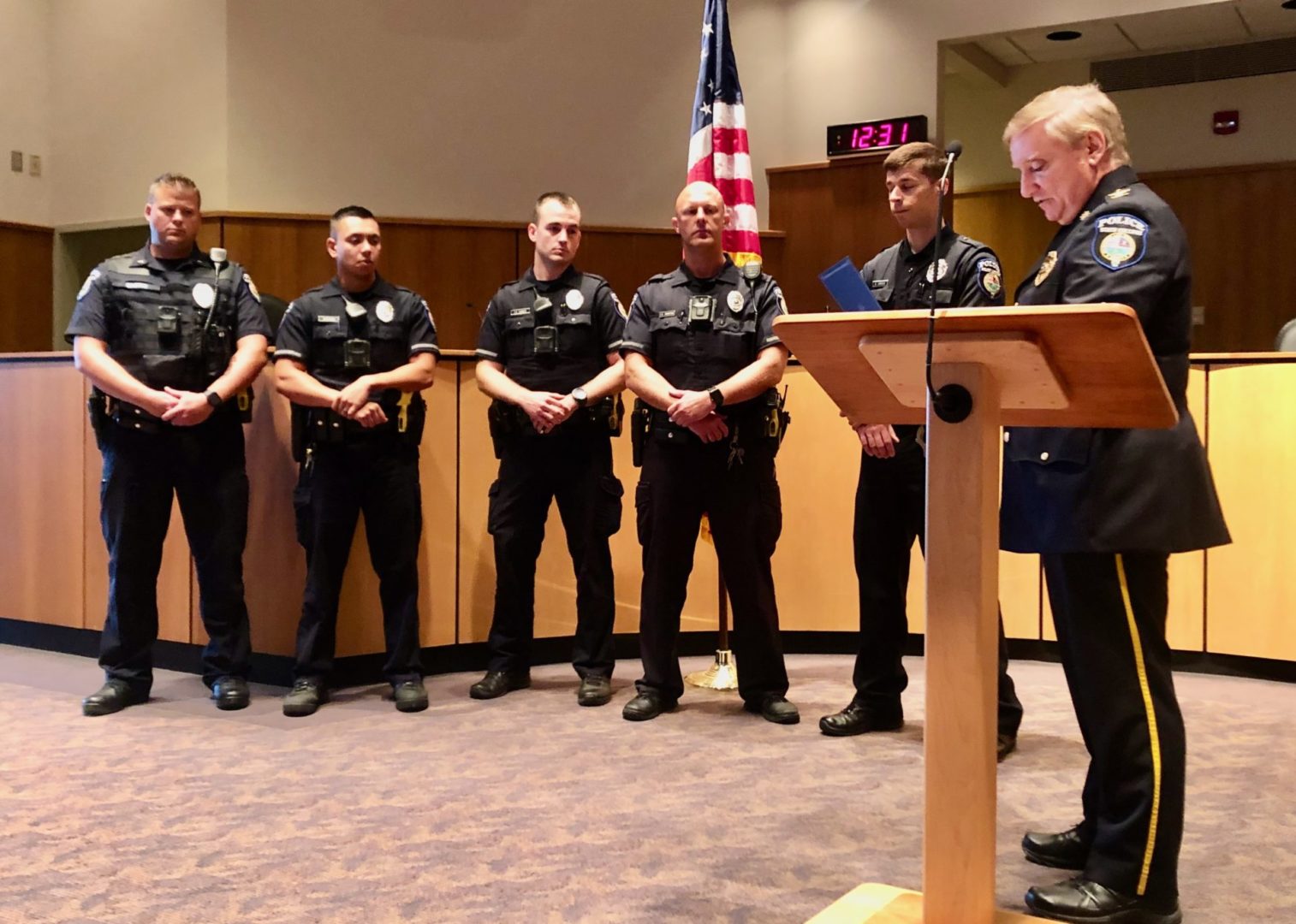 The State College Police Department on Wednesday honored 11 officers for life-saving and courageous acts over the past year.

“I think most of us know that this is the rule rather than the exception,” Chief John Gardner said of the honorees “This is the type of performance we get on a day-in and day-out basis… I just want to say how much I respect these gentleman, all the people who work in the police department for the untold sacrifices they provide every day in their service.”

Lt. Barrett Smith, officers Larry Crawford, Cameron Earnest, Dean Woodring and Benjamin Capozzi received the Medal of Valor for rescuing a woman from a fire that destroyed her Crabapple Court home in March.

The officers and public works employee Jonathan McClure battled heavy smoke and intense heat as they attempted to go through the garage and into the home, where the woman was unable to get out on her own.

Woodring was first on the scene, using his flashlight and following the her yells to locate her. She was unable to hold onto her walker, and as Woodring waited for other officers to arrive, he became overcome by smoke and had to go outside for fresh air and to clear his eyes.

Smith and Capozzi also attempted to go inside the house but were forced out when Capozzi was overcome by smoke and heat.

As heavy smoke began to fill the garage, the officers and McClure were forced outside. As they did, the garage door began to collapse, requiring Earnest and Smith to force it back open.

Earnest went into the house alone and located the woman. He was soon joined by the others and they successfully began to get her out of the house and into the garage, having to stop once to get fresh air before getting her outside.

At the sidewalk, they were still in a cloud of smoke and body camera footage showed each of the officers in distress from the exposure. They heard the garage roof begin to collapse and a series of explosions later found to be from an oxygen tank inside the house.

After getting to the sidewalk Earnest, Crawford and Capozzi immediately tended to the woman and provided supplemental oxygen. They remained with her until fire and EMS personnel took over her care.

The officers were exposed to the smoke and fire for three and a half minutes as they moved the woman 65 feet to safety. Each of the men was taken to the hospital to be treated for smoke inhalation. The resident was seriously injured but has survived.

“Lieutenant Smith, Officers Crawford, Earnest, Woodring and Capozzi exhibited the highest degree of bravery, placing their own lives at risk to save the life of another,” Gardner said. “…The actions of the nominees reflect the highest degree of courage in the face of danger, thereby distinguishing their actions and self-sacrifice as being above and beyond the call of duty.”

The officers and McClure previously received the Life Saving Award.

Officers Kurt Stere and John Tlumac received the Life Saving Award on Wednesday for efforts to save a man in cardiac arrest on June 4, 2020. The officers arrived at the man’s home to find he was not breathing and had no pulse. They performed chest compressions and rescue breaths, and administered one shock from the department’s automated external defibrillator, before Centre LifeLink EMS arrived.

After LifeLink continued administering AED shocks and treatment, the man’s pulse returned and he began breathing again. He was taken to Mount Nittany Medical Center, where the officers also delivered the AED for download to aid in his treatment. He was subsequently discharged for rehabilitation and has not been back to the hospital since, Gardner said.

“The actions taken by these officers directly contributed to saving the life of this individual and they should be recognized for this effort,” Gardner said.

Stere received another Life Saving Award along with Sgt. Martin Hanes. On Feb. 20, they responded to a fraternity house where a 23-year-old man had a laceration on his arm after punching a window. They found he was bleeding profusely and Stere applied a tourniquet that a doctor later said saved the man’s life.

After EMS took him to the hospital, emergency room staff removed the tourniquet and blood began pouring from the laceration. Stere’s tourniquet was reapplied and remained in place as the man was flown to Geisinger Medical Center in Danville because of blood loss and damage to nerves, tendons, veins and an artery.

He didn’t know it at the time, but Stere had stopped an arterial bleed. Gardner said the attending physician at Mount Nittany told police, “The use of the tourniquet was essential in saving his arm and his life. Since the laceration damaged an artery the patient could have died from this injury from the blood loss.”

Officers John Aston and Eric Burnett and retired officer Mark Rhodes were awarded commendations for their role in apprehending a carjacking suspect following a high-speed pursuit on July 14, 2020.

Ferguson and Patton township police initially responded after a man, later identified as Kaison Mitchell, allegedly tried and failed to steal one vehicle, then pulled a woman out of her minivan and drove away in it. After crashing the van into two other vehicles, he allegedly fled, struck a man in the face, pulled him out of his car and drove off.

While Aston, Burnett and Rhodes coordinated a search in the State College police jurisdiction, state police spotted the suspect in Pleasant Gap and attempted to initiate a traffic stop. Mitchell then led police on a pursuit exceeding 100 miles per hour before troopers lost sight of him heading west on Brush Valley Road, Gardner said.

Rhodes deployed spike strips on Brush Valley Road near the Linden Hall Road intersection, while Aston and Burnett positioned their vehicles to continue the pursuit. The strip disabled the front tires of the suspect’s stolen vehicle, but Mitchell allegedly continued to flee, albeit at a much lower speed.

After Mitchell’s vehicle went off the road and into the woods, Aston pursued on foot. He found Mitchell still in the car and apprehended him without further incident.

“A high-speed pursuit is one of the most stressful and dangerous situations in policing,” Gardner said. “This pursuit involved an unknown suspect who committed several felonies and was in a stolen vehicle. The officers communicated and coordinated with each other and the 911 center to intercept this vehicle. They executed sound tactics and employed sound decision making to make a safe apprehension. The officers knowingly put themselves in harm’s way… and were able to end the pursuit safely without injuring persons or property.”

Mayor Ron Filippelli said the officers recognized on Wednesday are a testament to the State College Police Department.