More than a year after the Diner closed, construction began last month at is former location at 126. W. College Ave. as new ownership prepares to transition it to a Hello Bistro.

Although the exterior still resembles the throwback diner feel for the time being, the roof has been removed and the interior has been ripped out.

It will be the ninth location for Hello Bistro, which is owned by Homestead, Pa.-based Eat’n Park Hospitality Group. Most of the other Hello Bistro locations are in the Pittsburgh area, with one in Ohio.

She said the chain, is “changing just about everything” and that the recognizable façade will soon be gone. Andy Dunmire, Eat’n Park vice president of design and construction, said at a State College Planning Commission meeting in December that company officials did discuss whether they should maintain the façade in some way. adding that the company employs many Penn State graduates and that its chairman is James Broadhurst, an alumnus and longtime Penn State trustee.

The chrome façade was not a part of the original diner and was a ‘more recent variation,’ Dunmire said. Hello Bistro’s menu and atmosphere also are not what one would expect from a chrome-façade diner, he said.

Hello Bistro, which was created in 2012, is known for its large-scale salad bar with fresh ingredients, as well as burgers, fresh-cut fries, soups and sandwiches. 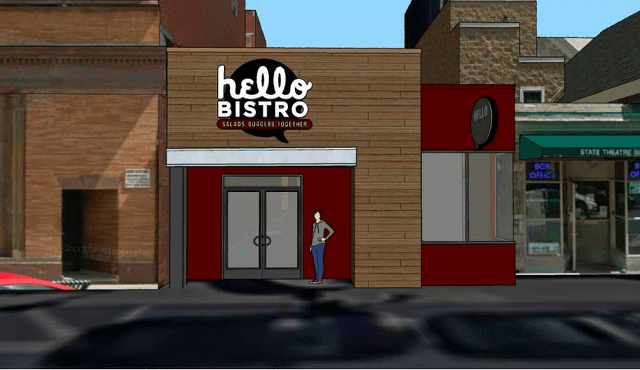 The Diner was open for nearly 80 years before closing last April 2018. It is best known for the famous Grilled Stickies, which remain a State College classic and are still being produced at a facility in Boalsburg even after the restaurant’s closing.

The original Diner building was prefabricated and placed on the foundation, then the remainder of the building and roof were constructed over it.

An evaluation by Hello Bistro to determine how to lower the front entrance to provide street-level ADA accessibility found that the original structure was in poor condition. Meanwhile, raising the height of the front third of the building to just over 17 feet will be consistent with the rear building height and allow rainwater to drain from the front to the rear alley.

Dunmire said the front third of the building would be removed down to the foundation and be rebuilt from there.